The Analyst Estimates Widget makes it easy to visualize changes in analyst ratings over time.

Analysts are individuals, investment banks or financial services companies that provide ratings, estimates and price targets that reflect their expectations for a security. For example, an analyst may issue a “Strong Buy” rating on Apple Inc. (AAPL).

TrendSpider sources analyst ratings from Benzinga, which collects ratings and recommendations from all major sell-side analysts. Through years of networking, the Benzinga news desk has established direct partnerships with major sell-side banks to curate a database of the highest quality ratings data in the marketplace.

Analyst ratings are important to traders because they tend to move the market on the day that they’re issued. While research suggests that analysts have a mixed track record, reinforcements to existing Buy and Sell recommendations tend to be more accurate. Traders can also use analyst ratings as a contrarian indicator or to fade the initial jump in price.

You can use Analyst Estimates on TrendSpider in a number of ways:

Actually, you can use Analyst Estimates data in your scripts, which means that you can combine Analyst-related criteria with technical criteria e.t.c. Read more about Scripts here: Scripts. Write once, use everywhere: scan, backtest, create alerts.

How to Use the Widget

The Analyst Estimates Widget has three components: The chart, summary table and reports list. You can also click the Events button in the top toolbar to display analyst ratings as an overlay on the price chart.

The chart provides a visualization of analyst reports, which makes it easy to understand changes in sentiment over time. Each row shows a single analyst’s reports over time with the most recent reports on the left. The rectangles in each row are shaded to represent the analyst’s sentiment at various points in time.

Let’s take a look at an example:

The top of the image above shows the overall Analyst Estimates chart. The large green area suggests that most analysts have a Buy rating on the stock, although there are several Hold ratings and four Sell ratings on the stock. TrendSpider’s algorithm assumes that an analyst maintains its rating on a stock unless the rating is more than 46 weeks old.

Morgan Stanley’s rating on CAT above shows that the analyst confirmed a Buy rating nine months ago (E). A week later, they released a report changing their ranking to Hold (D). A week later, they reaffirmed their Hold rating (C). They didn’t release a new report for six weeks and then reaffirmed their Hold rating again (B). There were a few Hold confirmations over the next 16 weeks before a Sell rating was issued eight weeks ago (A).

The summary table provides more detailed insights into analyst ratings over time. For example, the table below shows 8 Buy ratings over the past 13 weeks. You also can see that there were no reports for the last 2 weeks, and the most recent report (released within last 4 weeks) ranked this asset as a Hold.

The reports list shows a list of analyst reports with columns for date, analyst name and rating that are chronologically ordered.
There are three different symbols in this example: 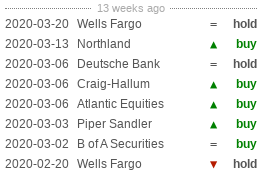 TrendSpider automatically categorizes different ratings into Buy, Sell or Hold buckets. The list below is not exhaustive, because we update it frequently (as we face new cases).