Multi-Factor Alerts for indicators with multiple timeframes is relatively straightforward.

TrendSpider uses the last calculated data point on the larger time frame for the alert. 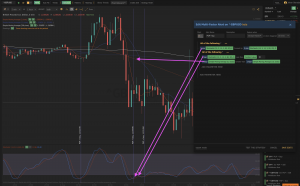 The alert correctly because it used an old data point from the 1-hour SMA 15 and 1-hour SMA 5. At the time the alert went off, the SMA 5 was greater then the SMA 15. Upon the closing of the 1-hour candle, the condition became untrue, which led to the apparent miss fire of the alert. This issue does not happen very often, but it is something to be aware of when creating these types of alerts.